Following World War II, rapid growth of the Federal government brought an influx of workers and returning veterans to Northern Virginia. In June 1945 there were 8,235 children enrolled in Fairfax County Public Schools (FCPS) at 42 schools. By June 1949 enrollment had increased to 12,118 children, but there were still only 42 schools in operation. Desperate to find classroom space, in the spring of 1949 the Fairfax County School Board authorized plans to build four emergency schools (Freedom Hill, Hollin Hall, Weyanoke, and Penn Daw at Jefferson Manor). These schools were to be made of cinderblock and would contain four classrooms each. The school at Penn Daw opened in the fall of 1949 with 120 pupils in grades 1-3, and functioned administratively as an annex of Groveton Elementary School under the leadership of Groveton's principal, Emmett Milton Day.

Shortly after the Penn Daw School opened, the Fairfax County School Board voted to name it Mount Eagle Elementary School. Learn why that name was chosen in this video produced for Fairfax County Public Schools’ cable television channel Red Apple 21.

Pictured above is the original four-room Mount Eagle Elementary School as it appeared in 1949. As the school year progressed, Mount Eagle’s head teacher, Josephine Gutshall Fox, was named principal. By the start of the next school year, 1950-51, pupil enrollment had doubled to more than 200 children and it became necessary to operate school on a half-day basis, splitting the students into two groups who attended school in separate morning and afternoon shifts.

FCPS administrators had been projecting record enrollment growth for several years, but were unprepared when actual growth far exceeded their expectations. Fairfax County’s landscape was rapidly evolving from one of rural dairy farms into sprawling suburban subdivisions. Because very little funding was available for school construction, FCPS teachers and students were forced to cope with large class sizes and difficult classroom conditions for many, many years.

The first addition to Mount Eagle Elementary School was constructed from 1951 to 1952. It consisted of additional classrooms, an administrative office, a library, and a new cafeteria wing. Simultaneously, a basement was dug and central heating was installed. The addition cost $382,576 to construct and was funded by a grant from the Federal government, by the sale of voter-approved school bonds, and by an allocation from the Fairfax County Board of Supervisors. By 1953 there were 22 teachers in 16 classrooms, and half-day shifts were again a necessity in the primary grades. In 1954, FCPS applied for additional grant funding to build a five-classroom addition to Mount Eagle. $124,500 in Federal aid was appropriated for the addition in June 1955, and construction was completed in August 1956. Pictured below is Mount Eagle Elementary School as it appeared in 1958. Watch as the original 1949 portion of the building is revealed.

Principal Josephine Fox departed Mount Eagle at the completion of the 1954-55 school year and was succeeded by Geraldine E. Singleton. In September 1960, FCPS opened its first intermediate schools. Prior to this time, elementary schools in Fairfax County educated children in grades one through seven. The seventh grade children in our community were assigned to Bryant Intermediate School on Quander Road.

The next major changes to come to Mount Eagle Elementary School occurred in the early 1960s. In January 1962, Principal Singleton passed away and two acting principals (Paul K. Moins and Viola K. Wright) served until Bruce O’Dell was appointed principal during the 1962-63 school year. At the same time, FCPS was in the process of slowly desegregating its schools. When Mount Eagle opened, public schools in Virginia were segregated by race. Mount Eagle was built to serve the rapidly expanding white suburban communities near Alexandria. At that time, African-American children living in our area were bused to Drew-Smith Elementary School, an all-African-American elementary school located at Gum Springs on Route 1. All racially segregated public schools in Fairfax County were closed at the end of the 1965-66 school year, marking the beginnings of the ethnically and culturally diverse Mount Eagle school community we know today.

Principal O'Dell departed at the completion of the 1966-67 school year and was succeeded by William S. Tarbox who served as principal until 1976. During his time as principal, Mount Eagle had its first renovation, but records indicate only minor work was done, such as fixing doorways, adding shelving, and painting.

From the mid-1970s into the early 1980s, student enrollment began a gradual decline resulting in the closure of several schools in the eastern part of Fairfax County. The closures affected neighborhoods that saw the earliest growth post-World War II. The children in these neighborhoods were graduating high school, and there were fewer families in the area with young children. Mount Eagle was one of the first schools studied for closure. In 1976, the School Board initiated a study to determine whether or not to close Mount Eagle or Quander Road elementary schools and Mount Eagle, due to the recent renovation and the pupil capacity of the building, was spared.

In 1976, Principal Tarbox was succeeded by our eighth principal, William E. Campbell. Our school had 442 students and the building was operating at 85.5 percent capacity. All of the students walked to school except for the kindergarteners, and our cafeteria served breakfast and lunch. Unlike many schools at this time, Mount Eagle had a physical education room, but it was not like the gymnasium we have today. During the 1971 renovation, a physical education room was constructed out of a converted coal bin, which sounds bizarre to us, however "it was not the worst space in terms of a physical education facility" according to School Board records. David Lunter became our school's ninth principal in 1980 and in 1985 construction began on a gymnasium and music room.

The gymnasium and music room were built by the N. S. Stavrou Construction Company at a cost of $756,000. Upon completion, the gymnasium was formally named by the School Board in honor of Patrick D. Wells and Margaret Cantrall. The School Board resolution naming the gym stated that Wells was the physical education teacher at Mount Eagle. He was credited with "maintaining a quality physical education program under the most adverse conditions." Cantrall was a volunteer at Mount Eagle who "obtained public support from local business and community organizations, from the P.T.A., and from the principals for successful completion of a gymnasium for the children at Mount Eagle Elementary School."

Mount Eagle Elementary School has undergone two renovations since the construction of the gymnasium and music room. In 1990, a building-wide renovation and additional classrooms were built by the Brian R. Walker Construction Company for $2,025,000.

A second building-wide renewal and modernization began in 2009. The total cost of the project, contracted to R. J. Crowley, Inc., cost $7,350,000. The photographs below show the progress of the construction in February 2009 and October 2009. The original 1949 section of our building was enclosed when the new classrooms were added to the front of our school. 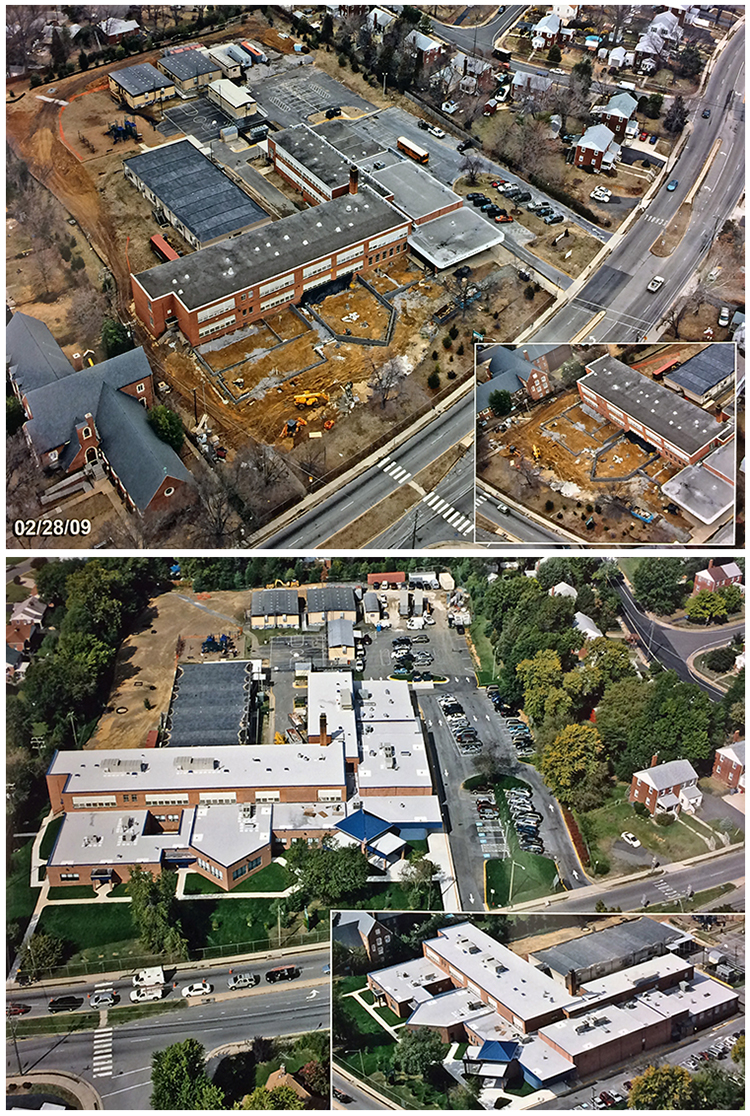